The Story of a Father and Son's First Meeting in Reunion, a Short Story by John Cheever 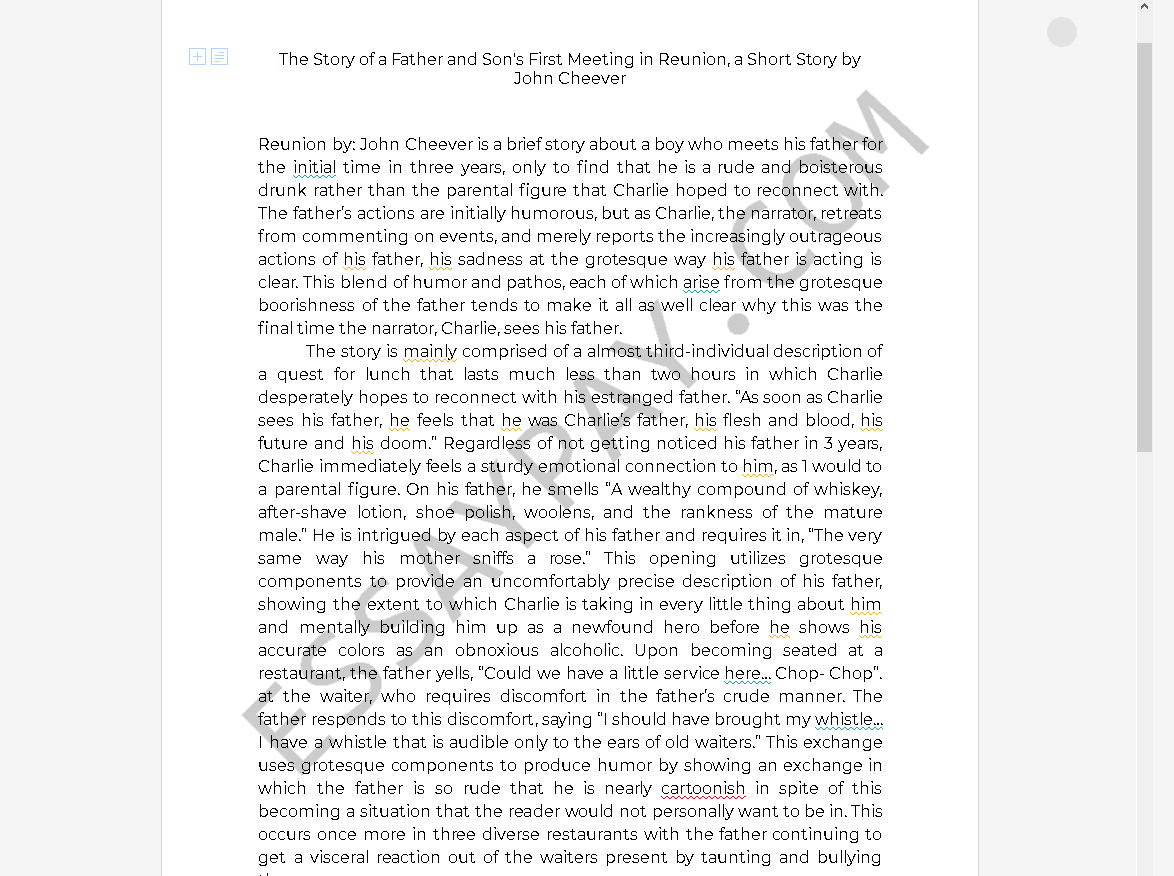 The Story of a Father and Son's First Meeting in Reunion, a Short Story by John Cheever

Reunion by: John Cheever is a brief story about a boy who meets his father for the initial time in three years, only to find that he is a rude and boisterous drunk rather than the parental figure that Charlie hoped to reconnect with. The father’s actions are initially humorous, but as Charlie, the narrator, retreats from commenting on events, and merely reports the increasingly outrageous actions of his father, his sadness at the grotesque way his father is acting is clear. This blend of humor and pathos, each of which arise from the grotesque boorishness of the father tends to make it all as well clear why this was the final time the narrator, Charlie, sees his father.

The story is mainly comprised of a almost third-individual description of a quest for lunch that lasts much less than two hours in which Charlie desperately hopes to reconnect with his estranged father. “As soon as Charlie sees his father, he feels that he was Charlie’s father, his flesh and blood, his future and his doom.” Regardless of not getting noticed his father in 3 years, Charlie immediately feels a sturdy emotional connection to him, as 1 would to a parental figure. On his father, he smells “A wealthy compound of whiskey, after-shave lotion, shoe polish, woolens, and the rankness of the mature male.” He is intrigued by each aspect of his father and requires it in, “The very same way his mother sniffs a rose.” This opening utilizes grotesque components to provide an uncomfortably precise description of his father, showing the extent to which Charlie is taking in every little thing about him and mentally building him up as a newfound hero before he shows his accurate colors as an obnoxious alcoholic. Upon becoming seated at a restaurant, the father yells, “Could we have a little service here… Chop- Chop”. at the waiter, who requires discomfort in the father’s crude manner. The father responds to this discomfort, saying “I should have brought my whistle… I have a whistle that is audible only to the ears of old waiters.” This exchange uses grotesque components to produce humor by showing an exchange in which the father is so rude that he is nearly cartoonish in spite of this becoming a situation that the reader would not personally want to be in. This occurs once more in three diverse restaurants with the father continuing to get a visceral reaction out of the waiters present by taunting and bullying them.

The father never ever does get his son the promised lunch, as he is alternatively progressively more drunk and belligerent toward these who would serve him, prompting his son lastly to leave him when they return to Grand Central Station, overcome with sadness.