Jack Sparrow's Character and his Trickster Traits in the Movie 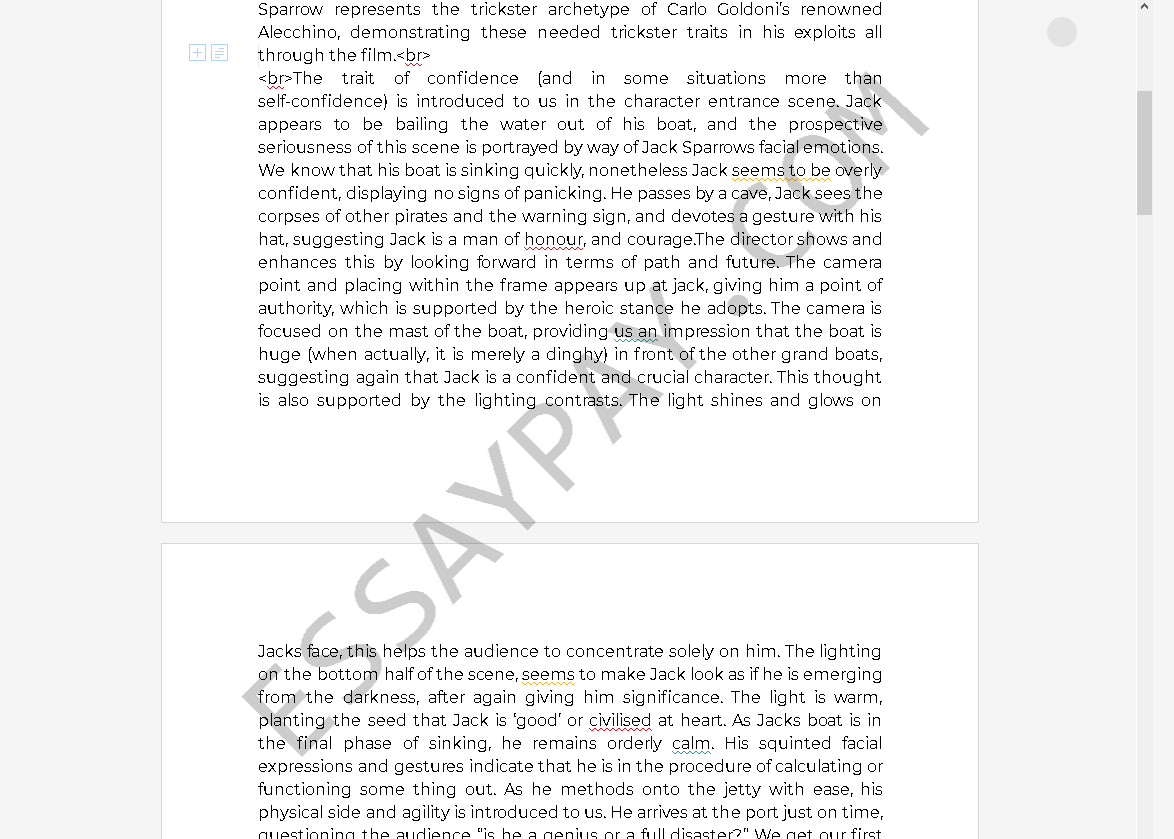 Jack Sparrow's Character and his Trickster Traits in the Movie

Pirates of the Caribbean: The Curse of the Black Pearl, a film directed by Gore Verbinski and produced by Jerry Bruckheimer back in 2003, is an action adventure film in which two civilians get twisted into the cruel globe of piracy. It has the precise dose of great fights, spectacular visual effects, interlaced plots, parallel actions… but above all great characters leading the story and twisting it on thousand different ways. This Walt Disney film is based on the well-known Disneyland and Disney World ride adventure called, of course, “Pirates of the Caribbean”. In contrast to the ‘fun’ ride at the Disney parks, this film has deeper meaning other than just the potential to capture and hold the viewers’ attention. By scrutinizing the literary elements of this film, we can uncover these deeper meanings and consequently enjoy the film to its fullest possible. The director and writers use a clever way of dosing info to the spectator. The characters of the film look for specific and frequently antagonistic objectives. But, the most charismatic of all the characters and one I admire is Captain Jack Sparrow, performed brilliantly by Johnny Depp.The character delicately balances amongst lucidity and madness. Jack Sparrow represents the trickster archetype of Carlo Goldoni’s renowned Alecchino, demonstrating these needed trickster traits in his exploits all through the film.

The trait of confidence (and in some situations more than self-confidence) is introduced to us in the character entrance scene. Jack appears to be bailing the water out of his boat, and the prospective seriousness of this scene is portrayed by way of Jack Sparrows facial emotions. We know that his boat is sinking quickly, nonetheless Jack seems to be overly confident, displaying no signs of panicking. He passes by a cave, Jack sees the corpses of other pirates and the warning sign, and devotes a gesture with his hat, suggesting Jack is a man of honour, and courage.The director shows and enhances this by looking forward in terms of path and future. The camera point and placing within the frame appears up at jack, giving him a point of authority, which is supported by the heroic stance he adopts. The camera is focused on the mast of the boat, providing us an impression that the boat is huge (when actually, it is merely a dinghy) in front of the other grand boats, suggesting again that Jack is a confident and crucial character. This thought is also supported by the lighting contrasts. The light shines and glows on Jacks face, this helps the audience to concentrate solely on him. The lighting on the bottom half of the scene, seems to make Jack look as if he is emerging from the darkness, after again giving him significance. The light is warm, planting the seed that Jack is ‘good’ or civilised at heart. As Jacks boat is in the final phase of sinking, he remains orderly calm. His squinted facial expressions and gestures indicate that he is in the procedure of calculating or functioning some thing out. As he methods onto the jetty with ease, his physical side and agility is introduced to us. He arrives at the port just on time, questioning the audience “is he a genius or a full disaster?” We get our first impressions of him becoming the trickster kind, as his timing and movement relates to that of Commedia del’arte’sAlecchino. When once again the camera suggests that he is in charge, by following behind him as he walks swiftly along the jetty. The director has used these camera angles to covey his viewpoint of Jack and manipulate and trick the audience. The scene lasts a small over a minute and there´s not a single dialogue in it. Every thing functions with the soundtrack (composed by Klaus Badelt) and staging. In this scene, we start off the get the smallest feeling that jack will be an essential character. He is introduced to us as a trickster, but 1 that we ought to understand to sympathise.

The traits of agility and cheating are very best shown off in the scene where Will and Jack are engaged in battle. The scene opens with Jack emerging as if out of nowhere and holding will at sword point. This associates with the Alechhino character, exactly where he has used the element of surprise. The setting of the dirty, serene blacksmith workshop makes for a excellent spot to stage a fight. The light is dark and low, like the slow and cautious soundtrack being played. The only warm light comes from the cracks in the walls, indicating to the audience that the spot is isolated and away from the hustle of the town. The director makes use of an more than the shoulder shot as Jack seems to be curiously eyeing Will. His facial expressions clearly indicate to the audience that he is trying to recall anything this is supported by the line “you seem somewhat familiar, have I threatened you just before?” Jack displays the typical trickster archetype of trying to stay away from fights, as he conjures up a comeback and decides to be swiftly on his way. The shot then switches to Will holding a sword up at jack. Portraying his over self-confidence Jack lowers Wills self-esteem as he, employing clever word play, threatens Will on the topic of crossing paths with a pirate. The director decides to covey that Jack can fight when he needs to, as the camera turns to a medium shot of Jack as he makes the first move of his sword. Jacks swordsman ship shows the audience that, despite the fact that he can be goofy at occasions, he is very skilled and practiced when it gets significant. As soon as once again, contrasting among his straightforward going nature and seriousness. The director utilised this specific shot to emphasise to the audience that Jack is seasoned and educated when it comes to carrying out what he does greatest. The light strikes down via the roof onto the edge of the shot, as jack confidently, taking extended strides, tends to make his way to the exit. He is stopped when Will throws his sword into the door latch. The camera is placed against the sword, hunting onto the side of jacks face. His facial expression is 1 of shock and surprise. The director’s intention in this shot was to convey to the audience how close the sword was from his face. He has does this brilliantly, as the shot captures each Jacks reactions, and the subtle lighting in the background. Jacks agility is displayed furthermore, as he is hung type a chain but continues fighting with the free hand. The lighting then alterations to a darker tone, as if the light from outside is being covered by anything. As jack is held at point, he withdraws a gun, clearly paying no interest to the rules of a fair fight. This indicates to the audience that he will do something to get his way, and frankly doesn’t care about the ‘rules’. The scene closes with Jack pointing the barrel of the gun at Will. The shot switches to a direct close up of Jacks face, as discomfort and shock is displayed. The panning out shot shows the result of this.

In conclusion, it is clear that the writers have attempted to present Captain Jack Sparrow as a character the audience is encouraged to admire, and I definitely do. The director emphasises his trickster traits and we realise that he is an specialist in his field. Like Alechhino, I believe Jack Sparrow will be a character remembered for many years to come.It´s is exciting to see how information is dosed in between the number of intersecting characters and targets. In that sense it’s a complicated and comedic film. The character of Jack Sparrow is one particular we can not eliminate from our minds. He possesses all the trickster traits, mixed with civilisation. The film is certain to age quite effectively.