Two versions of "The Sisters" by James Joyce 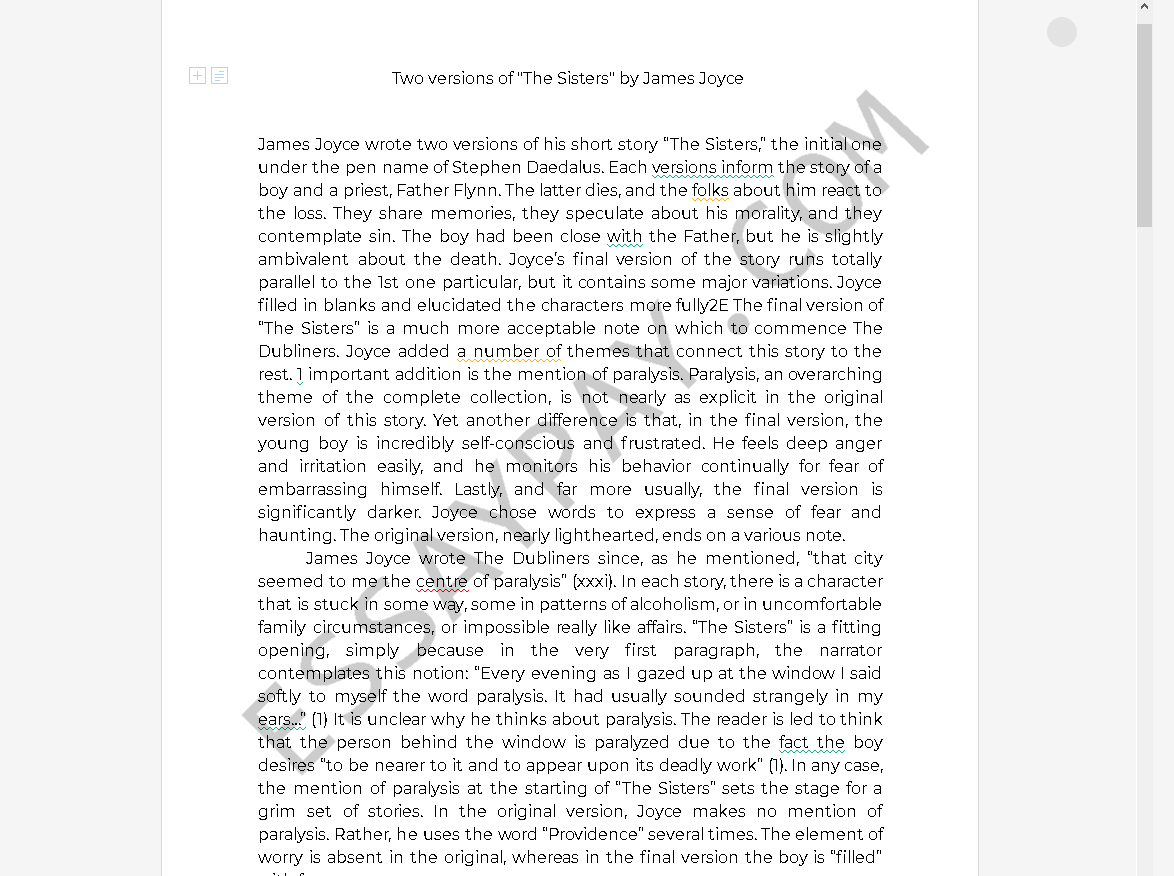 Two versions of "The Sisters" by James Joyce

James Joyce wrote two versions of his short story “The Sisters,” the initial one under the pen name of Stephen Daedalus. Each versions inform the story of a boy and a priest, Father Flynn. The latter dies, and the folks about him react to the loss. They share memories, they speculate about his morality, and they contemplate sin. The boy had been close with the Father, but he is slightly ambivalent about the death. Joyce’s final version of the story runs totally parallel to the 1st one particular, but it contains some major variations. Joyce filled in blanks and elucidated the characters more fully2E The final version of “The Sisters” is a much more acceptable note on which to commence The Dubliners. Joyce added a number of themes that connect this story to the rest. 1 important addition is the mention of paralysis. Paralysis, an overarching theme of the complete collection, is not nearly as explicit in the original version of this story. Yet another difference is that, in the final version, the young boy is incredibly self-conscious and frustrated. He feels deep anger and irritation easily, and he monitors his behavior continually for fear of embarrassing himself. Lastly, and far more usually, the final version is significantly darker. Joyce chose words to express a sense of fear and haunting. The original version, nearly lighthearted, ends on a various note.

James Joyce wrote The Dubliners since, as he mentioned, “that city seemed to me the centre of paralysis” (xxxi). In each story, there is a character that is stuck in some way, some in patterns of alcoholism, or in uncomfortable family circumstances, or impossible really like affairs. “The Sisters” is a fitting opening, simply because in the very first paragraph, the narrator contemplates this notion: “Every evening as I gazed up at the window I said softly to myself the word paralysis. It had usually sounded strangely in my ears…” (1) It is unclear why he thinks about paralysis. The reader is led to think that the person behind the window is paralyzed due to the fact the boy desires “to be nearer to it and to appear upon its deadly work” (1). In any case, the mention of paralysis at the starting of “The Sisters” sets the stage for a grim set of stories. In the original version, Joyce makes no mention of paralysis. Rather, he uses the word “Providence” several times. The element of worry is absent in the original, whereas in the final version the boy is “filled” with fear.

From the starting to the finish of The Dubliners, we encounter characters—young and old alike—who feel as even though they are beneath surveillance at all occasions. From the young boy in “The Sisters” to Gabriel in “The Dead,” there is a bevy of overly self-conscious characters. This boy is not almost as concerned with his personal behavior in the original version as in the final version. When he first returns residence, he thinks far more about himself than his dead friend. “I knew that I was below observation so I continued eating as if the news had not interested me” (2). And even though it does interest him, and he yearns to lash out at Old Cotter for his moral judgment of the late priest, he does not want to make a wrong move or show any emotion. It appears as though he is slightly ashamed or uncomfortable with his relationship with Father Flynn. His self-obsession continues the following day: “I identified it strange that neither I nor the day seemed in a mourning mood and I felt even annoyed at discovering in myself a sensation of freedom as if I had been freed from anything by his death” (4). The boy thinks only of his personal individual reactions, and of the way other people view him. The death is only substantial insofar as it impacts him. At the memorial service, his Nannie offers him cream crackers. “…but I declined simply because I thought I would make too considerably noise eating them” (7). Here once more, the death revolves about the boy2E No one would notice how a lot noise he would make eating the crackers, and his rejection of the offer appears rude. The boy also tiptoes into the dead-room so as not to draw consideration. Joyce most likely added the element of self-consciousness for two motives. The first is that it creates a link with the other stories, and the other self-conscious characters. There is a fluidity and logic in The Dubliners that would not exist without having typical threads such as this one particular. Another reason is that this type of behavior is standard of childhood. His stories are divided into 4 categories, and in order to make this one particular distinctly about childhood, it was essential to magnify the young and awkward aspects of the boy. In the original version, quite little time is spent inside the boy’s head.

When the adults go over Father Flynn, the boy is livid. He desires to interject, but he is also angry. “I crammed my mouth with stirabout for fear I may well give utterance to my anger. Tiresome old red-nosed imbecile!” (3) In the original version, the boy does not like Old Cotter, but his criticism by no means goes further than “tedious.” He sees him far more as a distraction. In the final version, Old Cotter has become a menace. The boy feels that Cotter is condescending and obnoxious. This difference is connected with the preceding paragraph about self-consciousness. In order to portray childhood vividly, Joyce showcased the boy’s insecurities and rage. Even although he does not express it or think it, the boy has lost a very close friend, and he is suffering. He expresses his grief as anger in this story.

Yet another difference is the all round somber tone of the final version of “The Sisters.” By means of the use of language rather than plot, Joyce accomplished a dark and depressing mood. One particular instance happens at the beginning, as the boy gazes at the window. In the original version, Joyce writes, “As I went house I wondered was that square of window lighted as ahead of, or did it reveal the ceremonious candles in whose light the Christian should take his last sleep.” In the newer version, we have, “If he was dead, I thought, I would see the reflection of candles on the darkened blind for I knew that two candles need to be set at the head of a corpse” (1). Joyce employs the word “corpse” much more than as soon as in the final version, and it impacts the all round tone of the piece. Another example is the haunting presence of Father Flynn, which is a lot significantly less present in the original. As the boy tries to sleep on the evening of Father Flynn’s death in the new version, he describes a grey face following him, attempting to speak to him. This is such a dark and scary image that it casts a shadow more than the rest of the story. An additional word decision that changes the story is the description of the Father’s nostrils. In the original, they are described as “distended.” In the final, they “black cavernous” (6). A single final example is the finish of the story. Whereas in the original, it ends with the exclamation, “God rest his soul!”, in the revision it ends with the much more haunting, “…there was something gone incorrect with him…” (ten). It is evident that Joyce walked by means of this story quite deliberately with a specific end in mind.

James Joyce rewrote “The Sisters” to exhibit the concept of paralysis, to give a stark and far more jarring portrayal of childhood, and ultimately, to alert these reading The Dubliners that they will not encounter a quite cheerful group of folks in the stories to come. The original version is forgettable. It is a story of a man dying and the subsequent memorial service. The final version is about a boy who loses a close friend, a single with possibly questionable morals. It is about the dead priest haunting the boy’s dreams, and images of the priest at the forefront of his young friend’s mind. In this version, there is a distinct sense that people are contemplating their personal deaths in light of the priest’s.