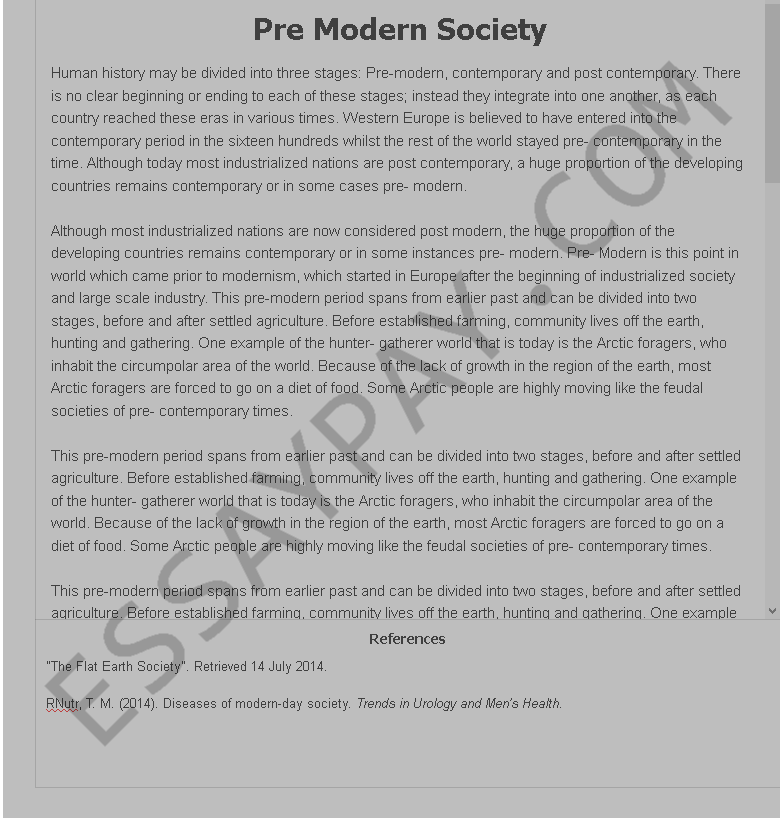 Human history may be divided into three stages: Pre-modern, contemporary and post contemporary. There is no clear beginning or ending to each of these stages; instead they integrate into one another, as each country reached these eras in various times. Western Europe is believed to have entered into the contemporary period in the sixteen hundreds whilst the rest of the world stayed pre- contemporary in the time. Although today most industrialized nations are post contemporary, a huge proportion of the developing countries remains contemporary or in some cases pre- modern.
[...]
This pre-modern period spans from earlier past and can be divided into two stages, before and after settled agriculture. Before established farming, community lives off the earth, hunting and gathering. One example of the hunter- gatherer world that is today is the Arctic foragers, who inhabit the circumpolar area of the world. Because of the lack of growth in the region of the earth, most Arctic foragers are forced to go on a diet of food. As food is the primary food source, some Arctic people are highly moving and specialize in various types of hunting and fishing, which differ with those seasons.
[...]
Fourth, at pre-modern societies most of this population is uneducated. Cognition is passed on verbally and older people play the critical part as people repositories of knowledge. In contemporary societies, still, younger people are normally better educated than their parents and some of that conventional knowledge and skills of older people grows outdated.
[...]