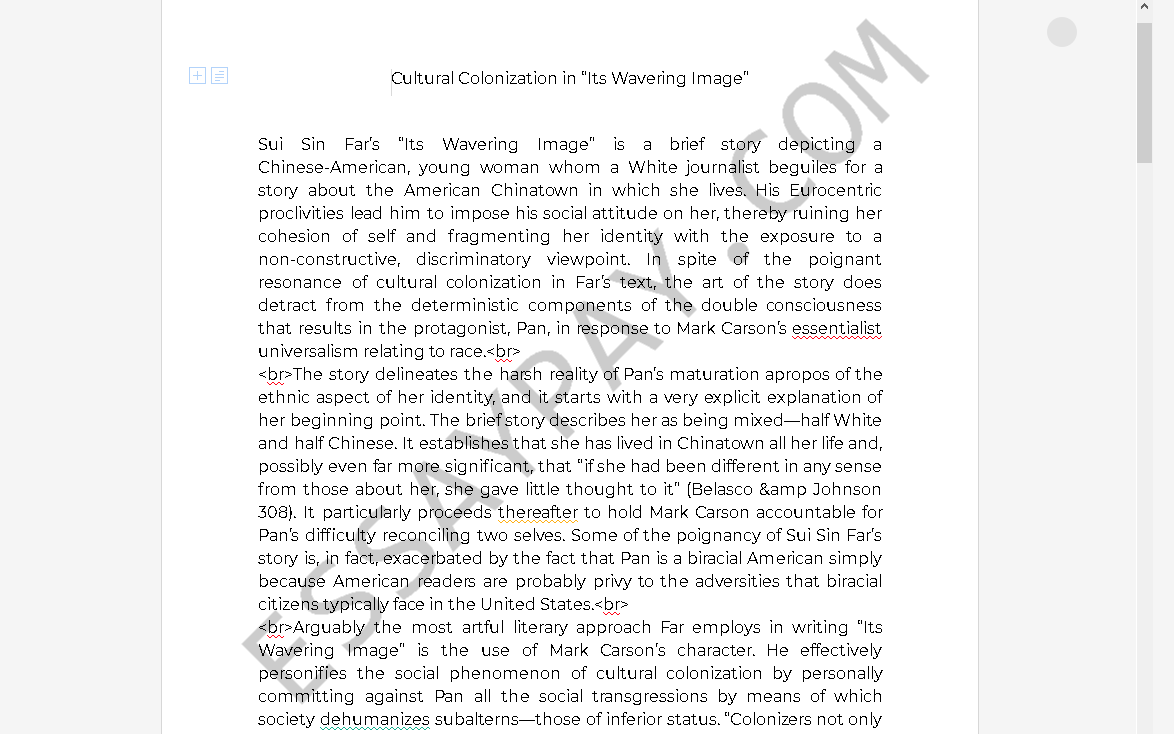 Sui Sin Far’s “Its Wavering Image” is a brief story depicting a Chinese-American, young woman whom a White journalist beguiles for a story about the American Chinatown in which she lives. His Eurocentric proclivities lead him to impose his social attitude on her, thereby ruining her cohesion of self and fragmenting her identity with the exposure to a non-constructive, discriminatory viewpoint. In spite of the poignant resonance of cultural colonization in Far’s text, the art of the story does detract from the deterministic components of the double consciousness that results in the protagonist, Pan, in response to Mark Carson’s essentialist universalism relating to race.

The story delineates the harsh reality of Pan’s maturation apropos of the ethnic aspect of her identity, and it starts with a very explicit explanation of her beginning point. The brief story describes her as being mixed—half White and half Chinese. It establishes that she has lived in Chinatown all her life and, possibly even far more significant, that “if she had been different in any sense from those about her, she gave little thought to it” (Belasco & Johnson 308). It particularly proceeds thereafter to hold Mark Carson accountable for Pan’s difficulty reconciling two selves. Some of the poignancy of Sui Sin Far’s story is, in fact, exacerbated by the fact that Pan is a biracial American simply because American readers are probably privy to the adversities that biracial citizens typically face in the United States.

Arguably the most artful literary approach Far employs in writing “Its Wavering Image” is the use of Mark Carson’s character. He effectively personifies the social phenomenon of cultural colonization by personally committing against Pan all the social transgressions by means of which society dehumanizes subalterns—those of inferior status. “Colonizers not only physically conquer territories but also practice cultural colonization by replacing the practices and beliefs of the native culture with their own values, governance, laws, and belief” (Dobie 211). Mark Carson attempts to supplant Pan’s values with his personal, as evidenced when the text reads, “with delicate tact and subtlety he taught the young girl that, all unconscious till his coming, she had lived her life alone” (Belasco & Johnson 309). The text goes on to say that this colonization was so powerful initially that Pan feels as even though her White self is compelled to dominate her Chinese self.

In the conversation at the starting of component two, Mark clearly attempts to convince Pan to accept the inner privileging of her own White identity more than her Chinese self, which only further establishes his personification of cultural colonization. What makes this problematic is that the outcome of his acting upon Pan yields a distinct double consciousness, and as the racial connotation of this term is typically accredited to W.E.B. Du Bois, his conceptualization thereof is far more unyieldingly deterministic than that which Mark Carson represents. Du Bois describes it saying: It is a peculiar sensation, this double-consciousness, this sense of constantly seeking at one’s self through the eyes of other individuals, of measuring one’s soul by the tape of a globe that looks on in amused contempt and pity. 1 ever feels his two-ness,—an American, a Negro two souls, two thoughts, two unreconciled strivings two warring ideals in 1 dark body, whose dogged strength alone keeps it from getting torn asunder. (Du Bois xxix) By this time, the term, double consciousness, currently had a psychological connotation and healthcare context, as acknowledged by William James in The Principles of Psychology. It signified a fragmentation of the ego in which two separate selves vie for hegemony in the socially constructed self—one a product of the privileged group’s ideology acting upon the self and the other a solution of the ideologically marginalized origin.

What tends to make Sui Sin Far’s albeit artful rendering of cultural colonization problematic is that it undermines the deterministic power of double consciousness in at least two essential ways. 1st, Pan’s getting biracial, as perfectly suitable as it may possibly look, suggests a weaker form of double consciousness that might want the aid of two warring ethnicities within her in other words, it disregards and thereby detracts from cultural colonization’s inherent potential to fragment even one particular whose heritage is singularly othered and no components privileged (e.g. obtaining two Chinese parents). In creating Pan the offspring of an interracial couple, Far falls brief of depicting the ideological pervasiveness of the phenomenon of double consciousness due to the fact the deterministic qualities thereof are such that double consciousness is very naturally relatable among non-Whites but might be perceived in reading “Its Wavering Image” as getting far more an affliction of mixed people than of simply all non-Whites.

The second shortcoming with regard to the deterministic power of double consciousness is that Pan is presumably old to only just now be encountering cultural colonization and wrestling with double consciousness. Mark Carson is clearly old adequate to have a job as a journalist, not just some intern, and he engages in duplicitous romance with Pan, which suggests she is of a comparable age. Even living in Chinatown all her life, Pan is eventually a Californian who, by this point, must have already encountered this divisive aspect of race relations in America. The proliferation of cultural colonization is rampant in locations with high concentrations of ethnically marginalized demographics, and double consciousness is a reasonably automatic consequence of the fragmentation cultural colonization causes. Even if she miraculously avoided contact with Whites all this time, the Chinese-Americans with whom Pan lives must be, at the really least, impacted to the point of practicing cultural mimicry, “imitation of dress, language, behavior, even gestures—instead of resistance” (Dobie 211). This is the privileged half of the twoness Du Bois describes.

The concept of double consciousness is 1 that Du Bois explains as being somewhat perennial like the timbre of one’s speaking voice it is created incredibly early and remains as long as the colonized individual. For this explanation, the adverb he utilizes to clarify how extended 1 feels this “twoness” is “ever,” and the adverb with which he describes the observation of self by means of the eyes of other individuals is “always.” Sui Sin Far’s depiction of cultural colonization undermines the pervasiveness of double consciousness in order to generate the young-adult, tragic-enjoy story between the colonizer and the racially innocent protagonist. As such the text only exemplifies the advantage of double consciousness, which shows up as an elusive duality that constitutes peace among two reconciled selves. Pan is forced to abandon this advantage in her resistance against cultural colonization when she embraces her Chinese culture completely even so, double consciousness is at least as considerably a disadvantage, and Henry Louis Gates discusses this duality of benefit and disadvantage at length in relation to his concept of double voicedness, explaining that it creates a distinctive voice for African Americans that they can indulge in each Black and White encounter but that the individual fragmentation of identity can be perilously irreconcilable.

Sui Sin Far opts for the artful rendering of this colonization and elegantly captures the external conflict, but specific components of the art detract from the accuracy of Far’s rendering of the internal conflict. Double consciousness is not shown to be as detrimental or as deterministic as it genuinely is, specially in light of Pan’s idealistic triumph over colonization by way of discovering herself completely inside the parameters of Chinese identity. As empowering as the message is, these facts lend to a more romantic view of cultural colonization, ignoring the reality of the majority of the ethnically marginalized who devote their lives vacillating back and forth among the constructed self of perceived origin and the constructed self that supports the ideology that others them.