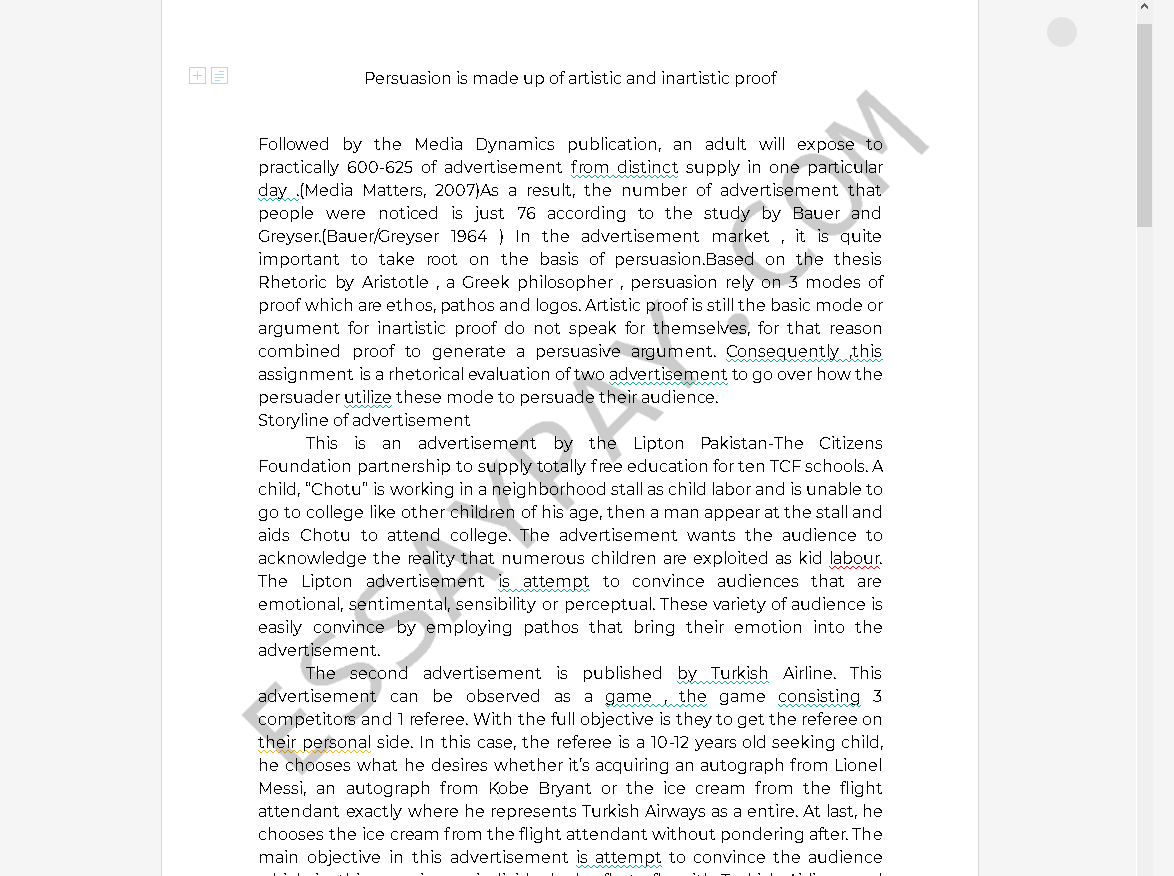 Followed by the Media Dynamics publication, an adult will expose to practically 600-625 of advertisement from distinct supply in one particular day .(Media Matters, 2007)As a result, the number of advertisement that people were noticed is just 76 according to the study by Bauer and Greyser.(Bauer/Greyser 1964 ) In the advertisement market , it is quite important to take root on the basis of persuasion.Based on the thesis Rhetoric by Aristotle , a Greek philosopher , persuasion rely on 3 modes of proof which are ethos, pathos and logos. Artistic proof is still the basic mode or argument for inartistic proof do not speak for themselves, for that reason combined proof to generate a persuasive argument. Consequently ,this assignment is a rhetorical evaluation of two advertisement to go over how the persuader utilize these mode to persuade their audience.


This is an advertisement by the Lipton Pakistan-The Citizens Foundation partnership to supply totally free education for ten TCF schools. A child, “Chotu” is working in a neighborhood stall as child labor and is unable to go to college like other children of his age, then a man appear at the stall and aids Chotu to attend college. The advertisement wants the audience to acknowledge the reality that numerous children are exploited as kid labour. The Lipton advertisement is attempt to convince audiences that are emotional, sentimental, sensibility or perceptual. These variety of audience is easily convince by employing pathos that bring their emotion into the advertisement.

The second advertisement is published by Turkish Airline. This advertisement can be observed as a game , the game consisting 3 competitors and 1 referee. With the full objective is they to get the referee on their personal side. In this case, the referee is a 10-12 years old seeking child, he chooses what he desires whether it’s acquiring an autograph from Lionel Messi, an autograph from Kobe Bryant or the ice cream from the flight attendant exactly where he represents Turkish Airways as a entire. At last, he chooses the ice cream from the flight attendant without pondering after. The main objective in this advertisement is attempt to convince the audience which in this case is any individual who fly to fly with Turkish Airlines and think about them the very best of the best. On the other hand, Turkish Airline advertisement is try to convince those realism which think anything due to their credibility and reliability. So when the advertisement is portrayed the public figure or expert that had qualifications, those audience will think it efficiently.


Ethos is the appeal to ethics and credibility of the persuader, which is the very first element in the theory of persuasion, and it refers to the character of the speakers or persuaders. Apart from the character, non-verbal messages are incorporated such as physical appearances, reputation and the way messages are delivered (Demidorgen, 2010, p.192).

In the Turkish Airline advertisement,the use of ethos which consist of convincing the audiences by invite the planet well-known athletes which are Kobe Bryant and Lionel Messi.In another words, the target audience believe in this item and Turkish Airlines just since Kobe Bryant and Lionel Messi are in this industrial . Both of them have credibility to convince the audience simply because they are renowned athlete.


Aristotle’s proposition to pathos is the psychological appeals, which relies on the receiver’s emotional. Apart from, the tone or the mood of the speech is also 1 of the appealed to the will of the audiences (Demidorgen, 2010, p.192).

To persuade the audience, the advertisement begins with Chotu envying the other children going to college whilst he is stuck washing dishes and serving tea. On the other hand, the kid, Chotu in the advertisement is a representation for all the other “Chotu” that demands to operate to supplement their respective families. In Pakistan, a vast majority of youngster labours think that their work is crucial to aid their household (Haider and Qureshi, 2016, p.five). Pathos also supported by the background sound,which the scene turns to a young man acquiring inspired by the lyrics go “Will somebody rise for me, will somebody come forward to help” which he gets motivated and goes forward to aid the kid. As a lot more children are forced to perform because of the escalating poverty, the audience will show sympathy for kid labours as they will agree to get a technical education only if it is free of charge (Haider and Qureshi, 2016, p.7).

Even so, there is no pathos appealed in the Turkish Airlines advertisement. Because this advertisement is to persuade the audience the service of the airlines is ideal of the greatest . They do not have to use emotional appeals to attract audience .


Logos is defined by the potential to purpose or to enable the audience to procedure the info in a logical way that is guided indirectly by the persuaders, such as providing syllogistic arguments to earn the trust of the audience.

From the Lipton advertisement, Chotu mentioned that the nearby stall is his college, the dishes are books and also the ladle he utilizes to stir tea is his pen. From this statement, viewers can inform that Chotu wishes to go to school like the others from his age group. If he is in a position to attend school, he would not be getting such imaginations. Then, they ought to know that he desires to go to college rather of operating at the regional stall, which could be due to either economic struggles of the family members or becoming the child of the stall owner, and he is expected to continue the family organization, therefore he becomes a youngster labour (Haider and Qureshi, 2016, p.3).

The use of logos that utilised in the second advertisement is the used between the characters in the film which are Kobe Bryant and Lionel Messi. By realizing that they do not want to drop and they are going to compete till they win. That’s a logical factor that to not quit at any time.It portrayed the genuine competitive circumstance in between the organizations by employing another funny shot approach . One more logos in the advertisement is the hidden position of Kobe Bryant and Lionel Messi which present “black” and “white” , to bring out the competitiveness among the American and African-American society logically .


For inartistic proof in the initial advertisement, show that a lot more than 40% kids in Pakistan do not access to education. According to Kid Rights Movement National Secretariat 2016, statistics have verified that over 12.5 million of kids in Pakistan are involved in child labour The other truth in this advertisement is about the campaign “Be awake to what really matter” from Lipton and The Citizens Foundation which is aiming to wipe out child labour from the existing society, especially in Pakistan and turn about their lives.


The 1st advertisement is primarily use the pathos which bring the audience to have emotion response with the setting of the youngster that not able to go to college due to their household financial difficulty . The Lipton advertisement wants to raise awareness of this social problems and to encourage the public to support these youngsters in Pakistan that are not able to go school. Therefore, they use pathos to generate the sad atmosphere to let audience feel empathy about these kids.. The second advertisement is concentrate on ethos which invite public figures to convince the audience . As in the advertisement, Turkish Airline has invited two globe renowned athletes with high expenditures to let their target audience believe and add trustworthiness in their business and solutions . They use celebrities ethos due to the fact people that admire them will be more willing to consume . The two advertisement that stated above use distinct mode of persuasion to convince distinct target audience, which depends on the approaches they communicate. According to Dainton (2011, p.2), “good” communication means that distinct things to distinct people in a different situation.